I don't live close to any orchid nurseries, despite living in Florida. I do live close to a garden center that gets it's plants from nurseries that carry unique things. Every so often they get in plants from E.F.G. Orchids in Deland. I love seeing those blue tags at a store down the street.

Once or twice a year I'll make the trip out to Deland when I feel like really spending some money. E.F.G. Orchids is fantastic. As in, always has good choices, always has decent prices, always friendly and helpful staff great. It's probably great that I don't live closer or my wallet would not look so great. 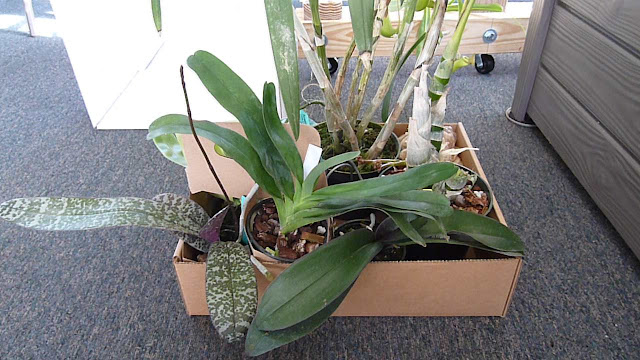 Keeping with my species Phal binge, with one or two deviations...in this box is:

Let's talk for a minute about Phal, Sogo Yenlin "Golden Coffee(?)" Coffees(?) Coffey(?) Striped Coffee(?) I asked about these as they had a variety of labels and sizes. I've seen them labeled all those ways elsewhere. They all bloom the same. Apparently they are all the same.  The most info I could get about them is these were from I-Hsin labs to a distributor in Apopka, to E.F.G. Apparently a lot of people have been finding them at their local Lowe's too. I bought this one because the variegation is the strongest I've seen on these. The numbers on the tag is the same as my Coffee as well. No amount of Googling has turned up a definitive answer for the right name for these guys. 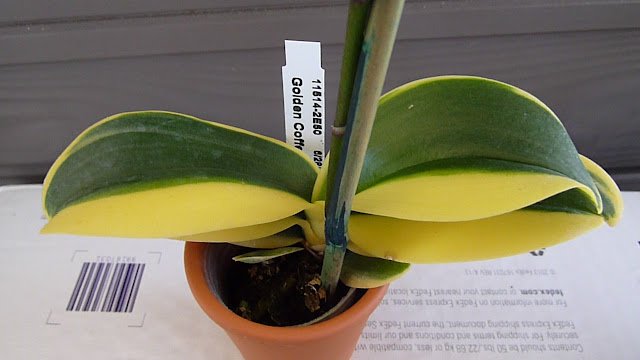 Fdk. After Dark 'Black Pearl' has one of the blackest flowers I've seen. There is no such thing as a black flower in nature, but brown, red, or purple so saturated it looks black. The darker color also has to do with cultural conditions, or so I've read. Warmer temps will bloom a lighter burgundy. Nothing else with "black" flowers grows well here, (or not for me anyway) so I had to try it. I'm hoping our nights are cool enough now for it to flower dark enough to look black. Like real dark black, blacker than space. 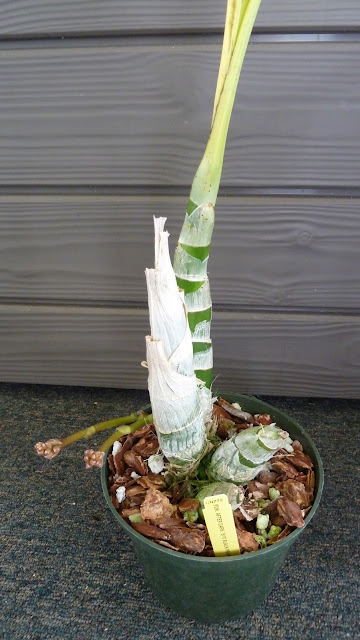 Angreacum sesquipidale. I was just watching an orchid haul video the night before I went to E.F.G. where a woman had found one in those Better-Gro bagged orchids and I got jealous. I feel like the universe is trying to tell me something by letting me find one the next day. Have I been good? 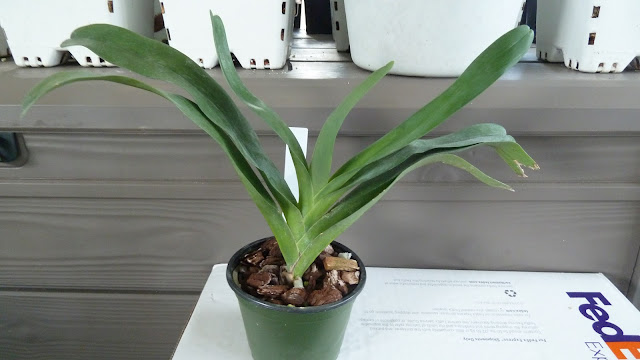 So, I originally recorded a video haul, because I love watching other people's hauls and unboxings on YouTube. Plus it really shows you the quality of plants you can expect. I can't hold the camera steady and am coughing because I'm getting over a cold still, so it turned out crappy. Maybe next time.
Posted by Melody at 12:05 AM 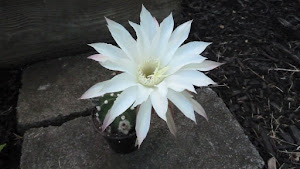 Melody
I'm growing mostly carnivorous plants, orchids, cacti, and other interesting plants inside and out, in Northern Florida, (previously apartments in FL and NY.) This blog will mostly be about stuff related to that.

This work is licensed under a Creative Commons Attribution-NonCommercial-NoDerivs 3.0 Unported License.